Just mention Livejournal in your paypal notes and get 30 percent off your order!

Just mention Livejournal in your paypal notes and get 30 percent off your order!

All you have to do is get onto my new mailing list.  3 people will be chosen at random for free beadwoven rings.  That's it - just subscribe.

I don't play dirty email tricks, and you can unsub any time.

the ring you get if you win will be something like this:

Ok. Dov Charney of American Apparel is a sleaze bomb.  I grok that.

Whipping it out for reporters, referring to people as "sluts" in the office, running around in his skivvies, he is not exactly someone I want to work for.

However all the little crafty girls now screaming "should we boycott?" -- that's really on my nerves.

I personally feel that the opportunity for a woman to get 15 and bennies instead of standing at a machine 18 a day and being forced to take a depo shot AND have to blow her boss for 8 bucks a week outweighs the plight of 3 women who allegedly feel uncomfortable and go home to a nice loft.

Yeah sue Charney, make him pay out of his own piggybank.  Yes he's anti union.  How many heads of major corporations are union friendly?  We can scream hypocricy but how many people bother to be inconsitent? How many people have been bullied, leched on, harrassed,  grossed out and exploited while working for corporations and quietly decided to move on *raises hand.*

AA as a company? Boycott?  Please.

I'm beyond excited.  beadweaver added me to her artist links.  I feel loved by a celeb of blogging!

This is up on my etsy shop right now.  Another piece of the button jewelry already went - go me!

In other words I'm still trading beading for cleaning and it's a bazillion degrees out. Bleah.

Better go post these to the other blog now, along with the pics of the brown pendant. 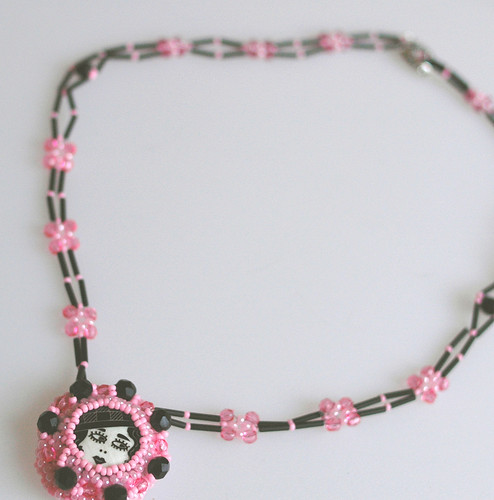 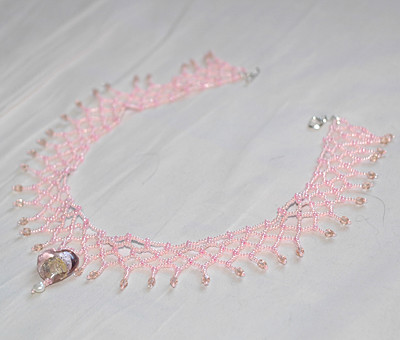 I've been playing with this stitch and I can't believe I haven't played with it more -- really fun. 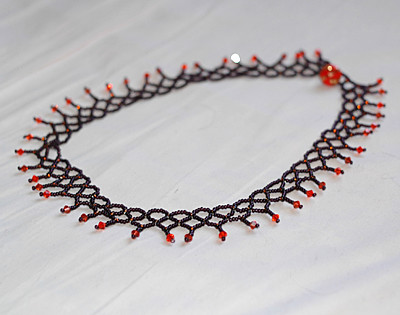 Lots of things have been taking up my time.  I had a really interesting business opportunity/proposition but I realized after thinking about it that it wasn't a deal which would be workable for me, so that was somewhat disappointing, but I imagine these things happen for a reason.

I'm building a blog for the bead-a-long, just something quick and dirty. Some people already seem to be into the idea, hopefully it will gain some momentum.

I am instigating a bead-a-long for August.

email me to say "I'm in"  redthread@redthreadarts.com

email me the image, or get it to me in some fashion before August 31.

VIEW THE OFFICIAL PLUG ON MY MAIN BLOG

promote it! use this button: